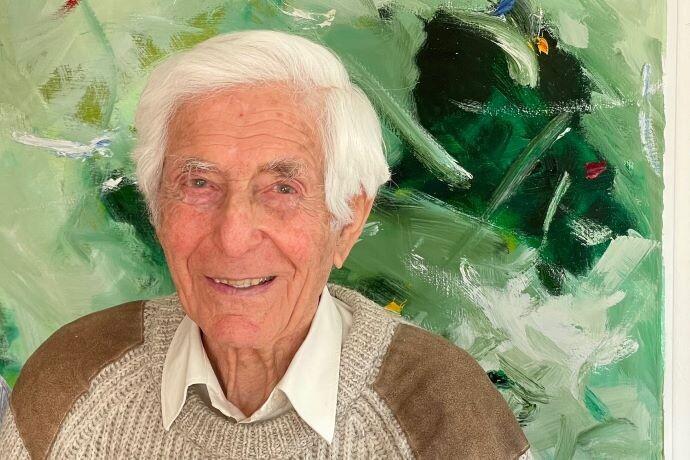 Born as the son (the second of four children) of our founder, Rudolf Schleicher Sr. (then Technical Director at BMW AG), he grew up in our representative villa at Boschetsrieder Straße 125 in Munich-Obersendling. There he spent his schooldays and the wartime – apart from some years at the end of the war when his mother and the children were sent to an isolated farm in Ried (near Weyarn). After finishing school he did an apprenticeship in the metal workshop at BMW in Munich, rounded off by his diploma in Mechanical Engineering at what was then the Munich Technical College.

After working for a few years in his father’s firm, he left Munich to work for three years as a development engineer in Cleveland/USA, studying economic science for one term at the University of Washington in Seattle. Back in Munich, he returned to his father’s firm, gradually taking over responsibility for the company together with his younger brother, Hans.

'Ideas not capital' was the guiding principle for the two brothers, hence ensuring the independence of the company. Their business activities included the extension of the premises in Boschetsrieder Straße, the concentration of business on the manufacture of camshafts, and the modernisation of the production facilities. An ardent development engineer, Rolf Schleicher’s major projects were the complete installation of own NC-controlled cam grinders with parts handling, upgrading of Schaudt ACMs to include control technology and feed management, the introduction of parts cleaning units, the construction of various special purpose machines and, the latest addition, an EMA hardening machine in 2012 – all that in addition to originally being responsible for a third of the customers. Since 2011, Rolf Schleicher has been a member of the company’s Advisory Council.

His life has not been without tragedies to be overcome: in 1992, his first wife, Elisabeth, died young, 1997 saw the sudden death of his brother and business partner, Hans - which also caused a major break in the company - and in 2018 he lost his second wife, Anneliese. Continuity was ensured when his son, Rudolf-Martin, and his nephew, Stefan, joined the firm.

White water canoeing, mountaineering and ski tours are his passions and so he has still kept mentally and physically fit since his retirement. His five grandchildren keep him in the loop, helping him to move with the times. The matters closest to his heart at present are the earth’s future and how to retain natural resources for coming generations. As a Christian he is also committed to helping the poor of this world: a list of his aid projects would go beyond the scope of this entry, but currently his main projects are building special ovens fired by wood for cooking in Africa and the construction and operation of the Jakdesa School in Haiti.

So it’s a very ‘Happy Birthday’ to our senior member with every wish for many more healthy, productive and active years!

Where do you find us